On April 11 the Faculty of Mathematics and Physics welcomed one of the most prestigeous contemporary mathematicians. Prof. Cédric Villani gave a lecture called Of Particles, Stars and Eternity. 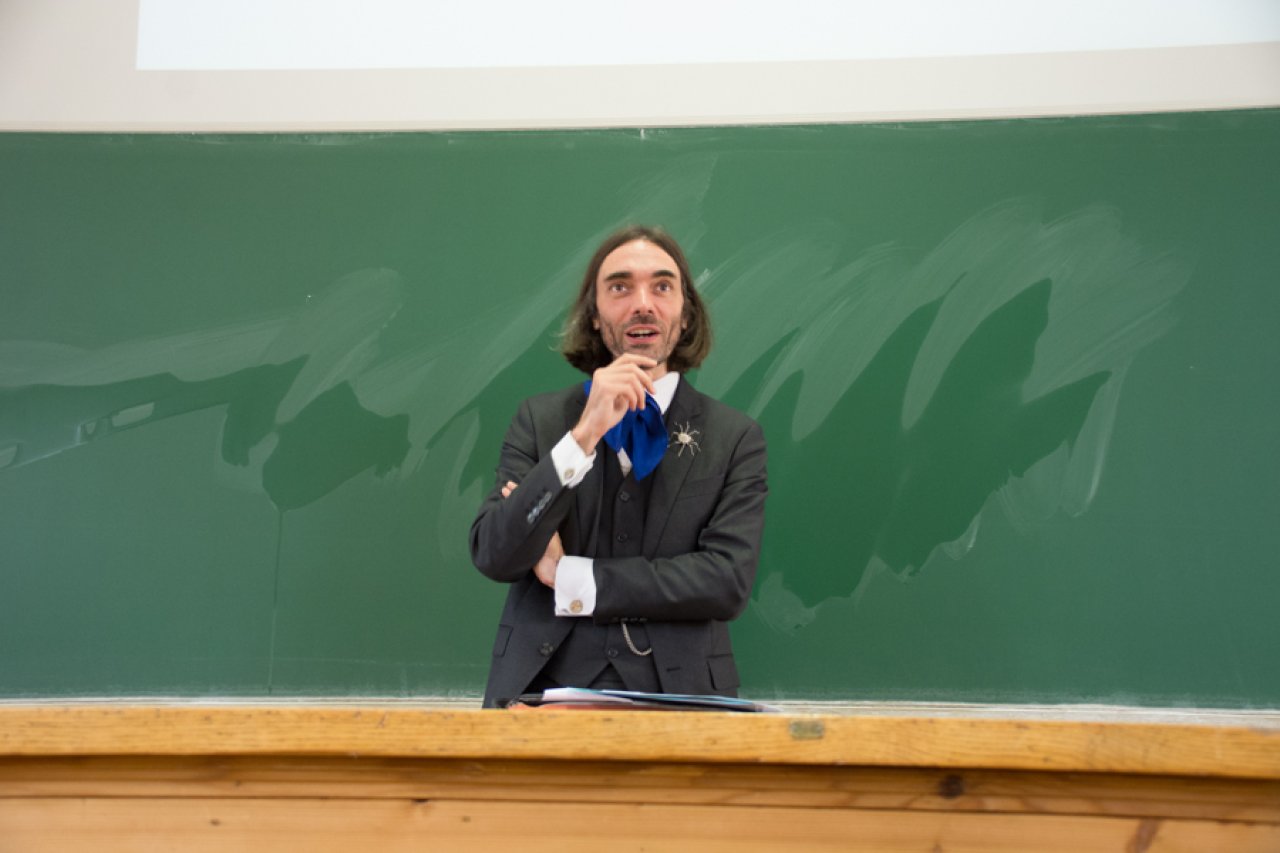 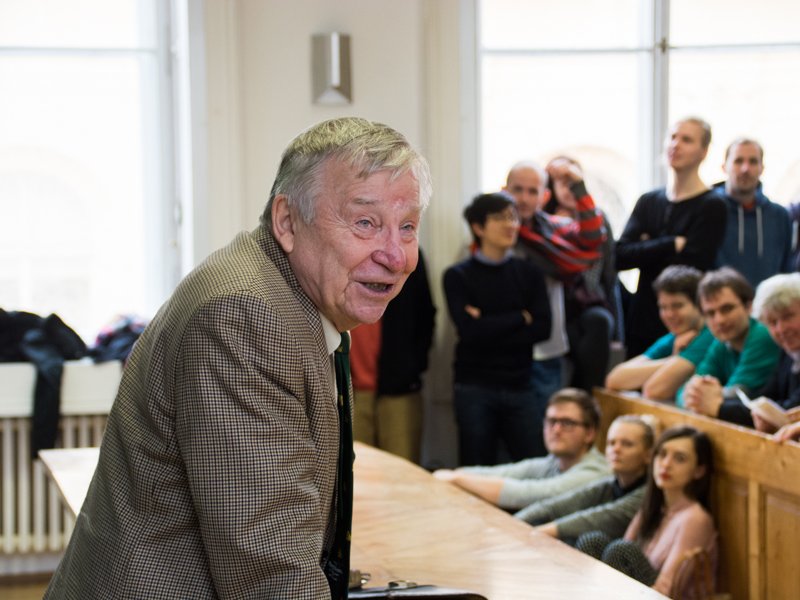 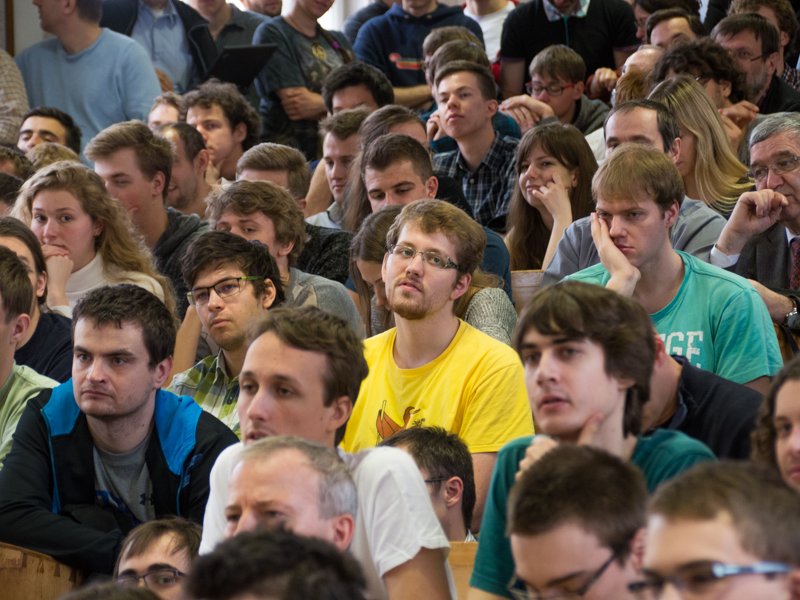 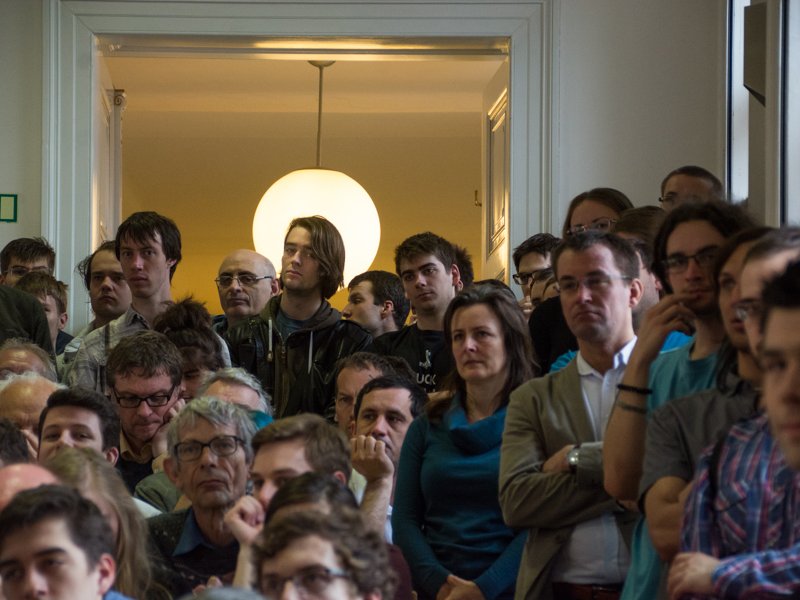 A prominent French mathematician visited Prague thanks to the invitation of the Learned Society of the Czech Republic. During the one day stay Prof. Villani gave two lectures to the Czech audience, the first one was focused on mathematical physics and was held at the Faculty of Mathematics and Physics, Charles University.

The performance of the 44 year-old mathematician, who is apart from his scientific credit known for his eccentric visage, attracted so many people that the lecture-room M1 at Karlov was completely full. Despite the unexpected flight delay, the audience was entertained by Prof. Jiří Bičák who lectured on Bernard Bolzano since Prof. Villani’s afternoon lecture is the first from the series of lectures of Bernard Bolzano organized by the Learned Society of the Czech Republic. Prof. Bičák was one of the important persons establishing this tradition.

The Dean of the faculty Prof. Jan Kratochvíl had a short entrée and at the end of Prof. Villani’s lecture gave the Klein bottle as a gift to this special guest. Prof. Villani was also given an original brooch to match his collection of spiders from the Vice-Dean for mathematics Doc. Mirko Rokyta.

A nearly 60 minute-long presentation was aimed at the question of stability of physical systems. Prof. Villani contributed to this field of study with his findings in the past for which he was awarded one of the most prestigeous awards the Fields Medal in 2010.

Prof. Villani, the director of the Institut Henri Poincaré in Paris and a professor at Claude Bernard University in Lyon, mainly focuses on partial differential equations, Riemannian geometry, and mathematical physics. He was awarded several awards such as Fermat Prize or Henri Poincaré Prize. He was awarded the mentioned Fields Medal for his work on so called Landau damping.

Apart from his two lectures, Prof. Villani was a guest of Czech Television's Hyde Park Civilizace.