A student of the Faculty of Mathematics and Physics spoke to us not only about his project Locaid.me, but also about entrepreneurship in the Czech Republic and the USA, his studies at Stanford University, and his reasons for deciding to teach Czech seniors how to work with computers. 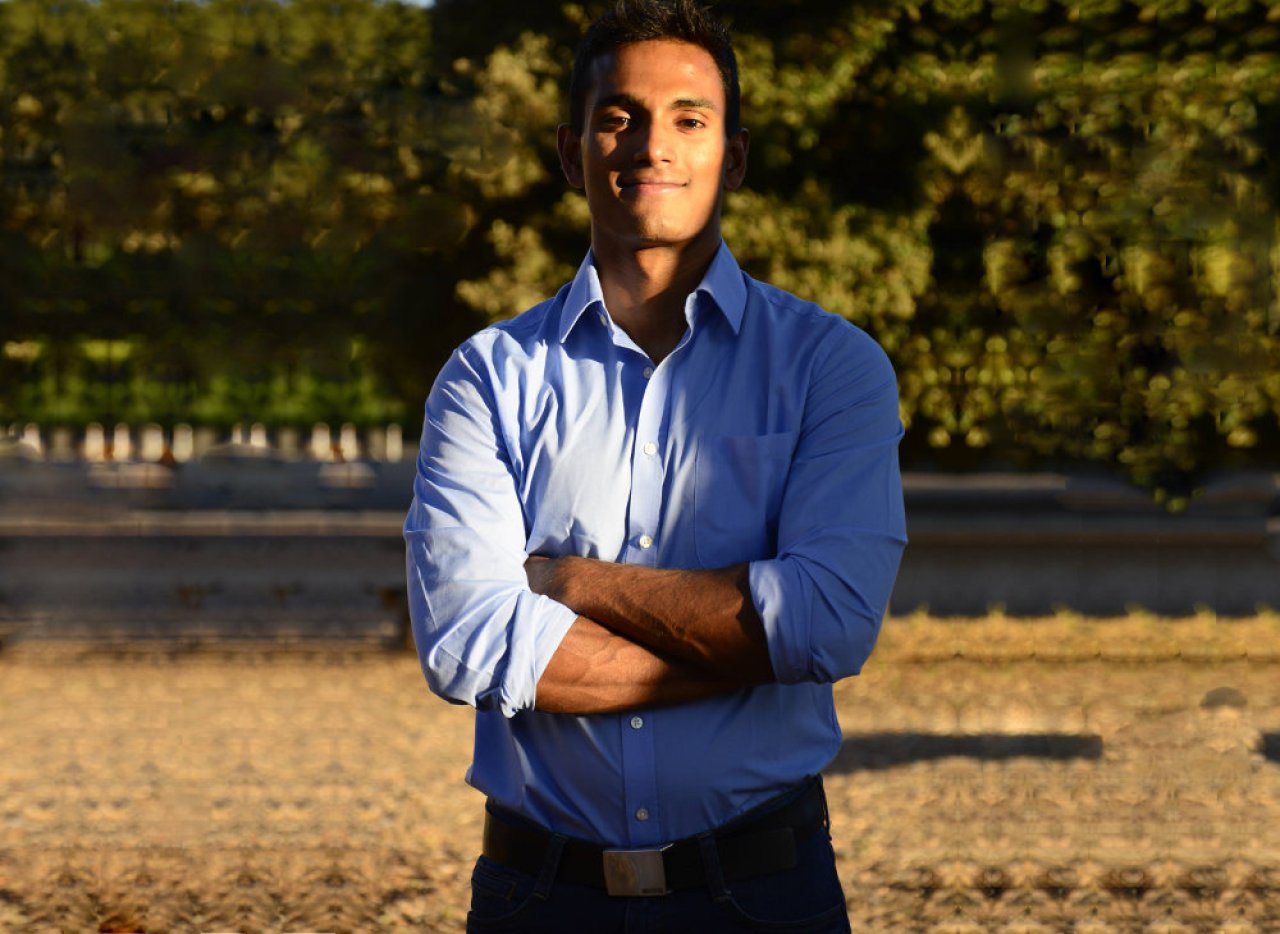 Aakash Ravi comes from the South Indian town of Tiruchirapalli. He, however, only lived in India until the age of two, before moving with his parents to Singapore. He also did not stay there for a very long time. He spent the remainder of his childhood in Japan, China, the USA, and several other countries. At the end, the journeys of his parents brought him to the Czech Republic where he started studying Computer Science at the Faculty of Mathematics and Physics, Charles University. Aakash Ravi will graduate in January. Apart from his studies and research, he spends most of the time working on his company Locaid.me. As a cofounder he was awarded Vodafone’s Nápad Roku Media Award.

You have quite a lot of activities. Which activity are you currently focused on the most?

I am currently working on two different things. One of the things I am working on is Locaid.me, which is the company we set up here and in the US. We specialize in creating hardware and software for public safety and helping people to evacuate buildings in emergency situations like fires and terrorist attacks. The second project is my research activity at Stanford University and here at the Institute of Experimental and Applied Physics, Czech Technical University. My primary focus is on my company, Locaid.me, because I believe that entrepreneurship moves a lot quicker than research and is therefore a much faster way to make an impact on the world.

It must be quite hard starting a business project on two different continents...

The main reason I am based in both these areas is because in Prague there are a lot of talented engineers and developers so it is the great place to have an engineering basis.

But the USA, in general, is more open to entrepreneurship and innovation - at least more than in Europe. Since I work more in the business side than in the technical side, I need to be in the U.S. quite often because that is where a lot of business is done.

Do you have some clients in the Czech Republic?

In the Czech Republic we are doing all our R&D in Adria Palace where we are located. There are also several clients that we are talking to but I am not allowed to say too much about these deals just yet. Finally, we have also been chosen to be a part of the Smart Prague initiative, which was initiated by the City of Prague for creating smarter cities. So there is a lot of interest in our system but none of this is as concrete as in the US where we have already done pilot demonstrations and signed LOIs (Letter of Intents) with high profile clients.

What is unique on your device in comparison with current solutions in the Czech Republic?

There are two different types of similar solutions that exist right now. One type is working in the space of trying to make indoor safety digitalized. So, for example, alarm systems that communicate with external emergency services, such as fire fighters and police officers. On the other hand, there is also the aspect of solely indoor navigation which is being done by a lot of companies. But we provide a combination of these several aspects by detecting a threat, helping people navigate out of the building, and communicating with external emergency services.

What was your main inspiration for undertaking this project?

Our main inspiration was actually from a personal experience we had at the Adria Palace, where our company offices are currently located. There was a bomb in the building next door and it took nearly two hours for the receptionist, who was initially sitting downstairs, to take the elevator upstairs and go room by room and inform everyone about the bomb and ask them to evacuate the building. Thankfully it wasn’t a real bomb; but if it was, we would not have gotten out of the building in time and it could have been a really bad situation.

You studied at an American school in Shanghai and now you are in the bachelor’s degree programme in Computer Science at the Faculty of Mathematics and Physics, Charles University. Why did you choose a Czech university?

At first, I actually got into several colleges in the US and Canada, so my initial plan was to go there. I realized, however, that it would be very expensive, even with some financial aid. And therefore I did some research and I noticed that the Faculty of Mathematics and Physics had this programme for English students. After a long period of reflection, I decided to take a leap of faith and enter into the university - I now think it was a great decision.

I had no idea how prestigious a university it was until I came here. Everyone talks about “Matfyz” like it is some place where only crazy smart people go to study; I didn’t realize that it was that highly regarded until I had already enrolled. I think the level of mathematics and computer science that they teach here is really phenomenal, and I would say that it is even comparable to the top-ranked Universities in other Western countries.

I think the way we are taught formal mathematics here from the very beginning completely changes the way we think. We are asked to argue with proof-based logic from day one, and I believe that this how you should learn mathematics. I was completely out of my depth for the first six months; I achieved great grades but I had to try very hard to do so. So it’s initially very hard, but I would say that once you learn mathematics here you can study it at any other university without a problem.

You have lived in several countries all around the world. Is there something that surprised you about the Czech Republic?

The biggest thing that surprised me was how beautiful the country was; as outsiders, we always think of the CR and other Central and Eastern European countries as similar to the former Soviet Union, where it is rather bleak and filled with old communist-style buildings. But when I finally came here and saw the city, I was fascinated by its rustic beauty. The people here are also very kind to me, especially when I speak Czech with them.

Do you have some friends at „Matfyz“?

Yes, I have a few friends from „Matfyz“. In general, although friendly, people from “Matfyz” are a little bit shy. They would rarely come out and talk to me, so I had to go and seek them out first.

You studied at Stanford University during the summer quarter and attended a program for international students. Why did you choose this program?

A lot of things came together at once for me to make the decision to join this program. One was my interest in research: I had the opportunity to do research in the field of computational biology there, in one of the genetic labs. The second aspect was my company Locaid.me, which was at that time very young; I realized that in the US it would be much easier to find early clients. The last aspect was the environment of Silicon Valley. The Stanford campus itself is a very friendly and hardworking place. You are surrounded by people who are hard-workers but at the same time know how to have fun; moreover, there are several networking opportunities in terms of events, speakers, and so on. When I was there I saw at least ten other students starting their own companies as well. It’s the kind of environment where no idea is too crazy, and people are allowed to break some rules and do things differently. This aspect also attracted me a lot.

During the summer Stanford holds the so-called Silicon Valley Innovation Academy, in which the best students have the chance to learn from expert coaches, mentors, and present their ideas/projects to successful entrepreneurs. Could you tell me more about this?

Yes sure, in the program you are put into teams. Each team develops an idea on what they want to do, or a problem they want to solve. In seven weeks you basically build a very basic company and business plan out of these ideas. So you have to do all the basic steps to launch a business including market research, basic product design & testing, business model creation, etc. And you of course get support from the University, and anyone who is connected with the university.

It is a very engaging and fast way to learn how to launch a business. At the end of the 7 weeks - if you are selected to the finals - you get to pitch your idea in front of a panel of experienced former entrepreneurs and investors in a stadium full of people. The finalists have a good chance to find an investor and really enter the market.

Were you and your team chosen?

We were one of the teams that got selected for the final. We were building an application that helps professional caregivers and family members who care for dementia patients engage with them in an easier manner. We actually won an award for this idea, and one of my teammates is planning to take it to market.

This was not the first time you were involved in nonprofits and taking care of seniors, could you tell us about some of your other ventures in this area?

Yes sure, with some other students I launched a non-profit that held computer courses for seniors in Prague. Stanislav Veselý, my student advisor, actually gave me the inspiration to launch this venture because he realized that it is much too expensive for seniors in Prague to obtain a solid education in computers and technology. Me and my colleagues realized that students could perform these courses for a much lower price, and in the end we actually did it for free with the help of some EU grants. We performed these courses with the help of organisations that organize a lot of events for seniors in the Czech Republic, as well as with a few community centres. It was a great experience for me because first of all I could practice my Czech language skills, and moreover because the senior citizens were so happy that a foreigner was taking the time to teach them. Even if my Czech wasn’t perfect, it helped them feel that people really cared about them. More than anything, they just want people to talk to them and show them that they haven’t been forgotten. Currently, I’m no longer involved in the venture, but I’ve left my amazing colleague and friend Lenka Čtrnáctová in charge, and she is doing a fantastic job.

Do you plan on doing something similar in the future again?

Yes, I hope so, although I don’t know exactly what I will do just yet. It sounds very cliché, but at the end of the day I want to make a world the better place, and I believe that non-profits have their place in achieving this goal. However, I also believe that if you want to make a really huge global impact, you have to be profit-minded in order to reinvest in your venture and grow it appropriately. So although I will definitely do non-profit work in the future, I will try to make it sustainable as a business, so it can actually grow and make an even larger impact.