Nobel Prize winner in physics was giving a lecture at Matfyz

Prof. Serge Haroche, the 2012 Nobel Prize winner in physics, lectured in the refectory of the Faculty of Mathematics and Physics, Charles University at the Lesser Town Square on Thursday June 21st. Prof. Haroche and two other French Nobel Prize winners spent a day at the Faculty of Mathematics and Physics during their stay in Prague. 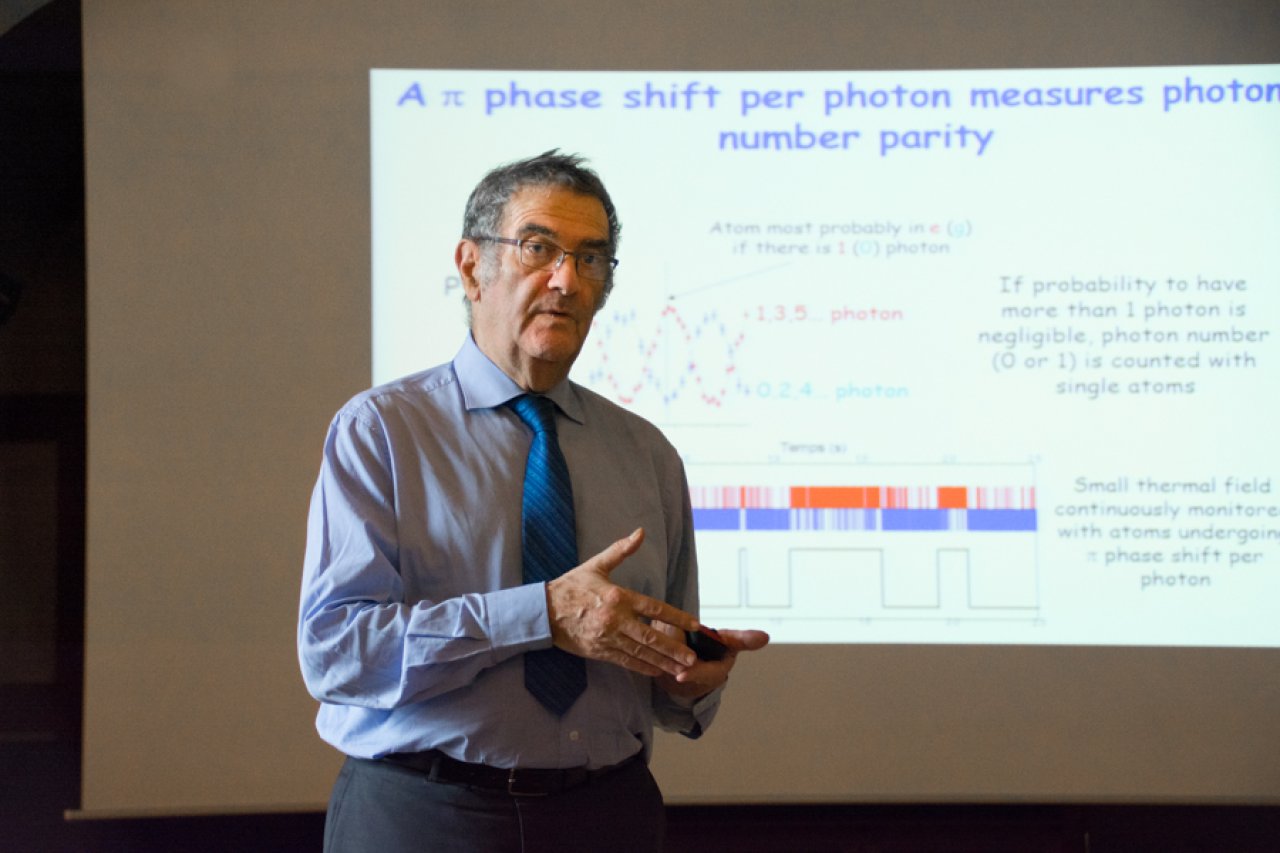 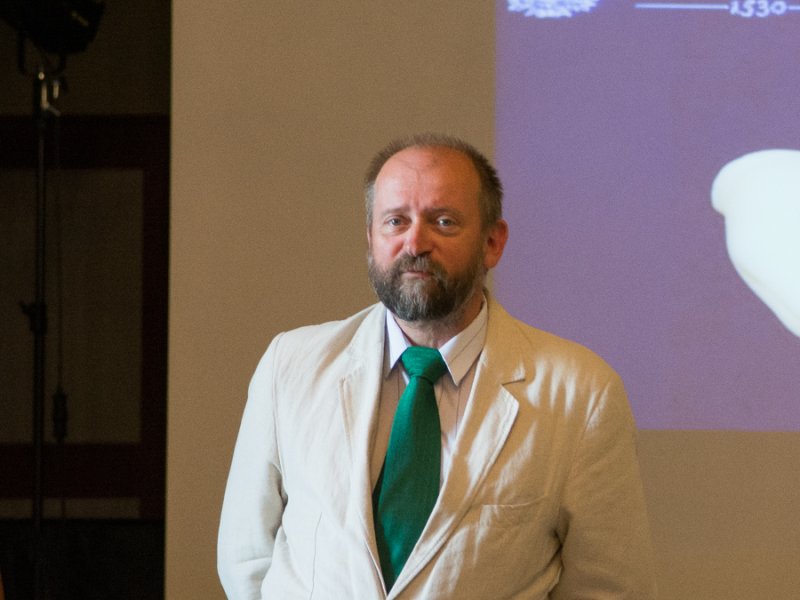 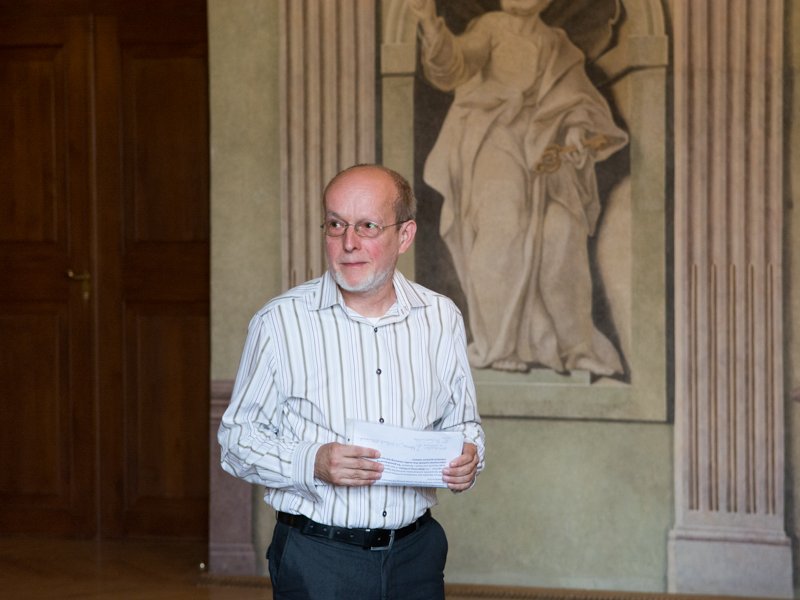 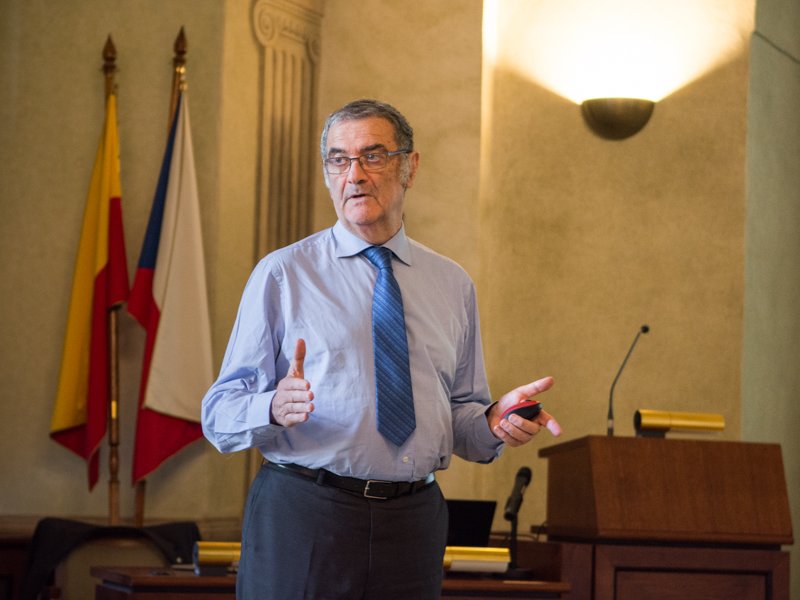 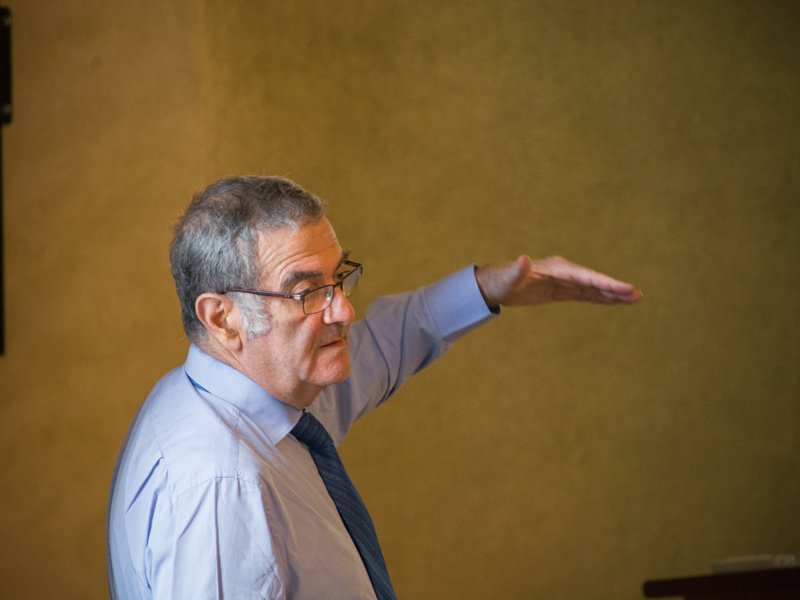 The whole event, the part of which was e.g. the conference Sounds of Science and other public speeches, was organized by the French institute in Prague. The lecture in the refectory that was called Juggling with atoms and photons in a box: from fundamental tests to new quantum technologies was dealing with experimental techniques which have been being developed by Prof. Haroche and his team in his French laboratory since the 70s of the previous century. His work, which is on the borderline between atomic and quantum physics, enabled a demonstration of prodigious laws of quantum physics and also became one of the pillars of nowadays deeply developed methods of quantum information system.

The lecture, which was attended by academic workers as well as the students of MathPhys, clearly illustrated fundamental principles and experimental methods based on the interaction of highly excited atoms with quantized electromagnetic field in a microwave cavity. The experiments of Prof. Haroche present unique means for states of matter that have no analogy to a classic world. The manipulation of these states brings several applications in future technologies. Prof. Haroche accented the importance of basic research – apparently useless “playing” with fundamental natural laws often brings the biggest discoveries of the highest practical value.

The lecture was followed by an informal discussion with students called “Beer with Ph.D. students”. Prof. Haroche then visited the building at the Charles Square where he took a view of the laboratory of optospintronics.

Serge Haroche was born in 1944 in Casablanca in Morocco. At the age of 12 he moved with his family to France. He studied physics at École Normale Supérieure and Université Pierre-et-Marie Curie in Paris. In 1971 he obtained his doctoral degree in physics, his research was done under the direction of Claude Cohen-Tannoudji who is himself the 1997 Nobel Prize laureate for his development of methods of laser cooling.

During his career Prof. Haroche published hundreds of works on experimental atomic physics and quantum optics. All his articles collected more than 20 thousand citations over the time. Prof. Haroche has taught at several prestigeous universities such as MIT, Harvard, Yale etc. Prof. Haroche has been a Professor at College de France in Paris since 2001.

Prof. Haroche was awarded many prizes and medals for his work. Thank to his remarkable scientific results he won the Nobel Prize in physics in 2012. He was awarded the Nobel Prize together with David J. Wineland from the USA for their “ground-breaking experimental methods that enable measuring and manipulation of individual quantum systems”.

The experimental research of Prof. Haroche is from the very beginning focused on the interaction of atoms with quantized electromagnetic field, which is on the borderline between atomic physics and quantum optics. During Haroche’s studies and at the beginning of his experimental career in the 70s of the previous century the used states of electromagnetic field used to have mainly a classic character. Atoms irradiated by radiofrequency fields as being dressed by a cloud of photons surrounding them were analyzed. The interest of Prof. Haroche has continuously dragged onto situations that were impossible to be theoretically described. Haroche’s works showed that the states of matter created by atom interactions with single photons show fascinating properties that follow the fundamental quantum principles and enable to realize the “thought experiments” discussed by the founding fathers of quantum theory.

During the 70s Prof. Haroche and his collaborators built up a laboratory in Paris where it was possible to start carrying out experiments like these. The technique based on atom-photon interactions crossing the microwave cavity irradiated by simultaneously tuned laser rays enabled them to create highly excited atoms so-called Rydberg states and demonstrate fascinating phenomena called Dicke superradiance, enhanced collective emission in a system of atoms. This new field of physics that engendered during these experiments is called Cavity Quantum Electrodynamics (cavity QED). This name refers to Feynman fundamental theory “quirky theory of matter and light” and provides us with a great potential of various quantum engineering applications.

During the 90s Prof. Haroche was the leading person of many key experiments carried out in his laboratory. Let us list only the most famous ones: demonstration of quantum noninteractive monitoring, direct monitoring of decoherence of mesoscopic superpositions of states so-called Schrödinger cat states, teleport of the atomic state, creating so-called EPR states. In the new millennium the focus of Prof. Haroche shifted from monitoring to more precise control of quantum processes. So we could now read articles such as Step-by-step engineered multiparticle entanglement, Coherent control of an atomic collision in a cavity, or Towards quantum simulation with circular Rydberg atoms. Indeed, mastering the world of quantum physics provides us with many new technologies and calculation possibilities. One day Prof. Haroche will be undoubtedly appointed a pioneer of a new quantum era.